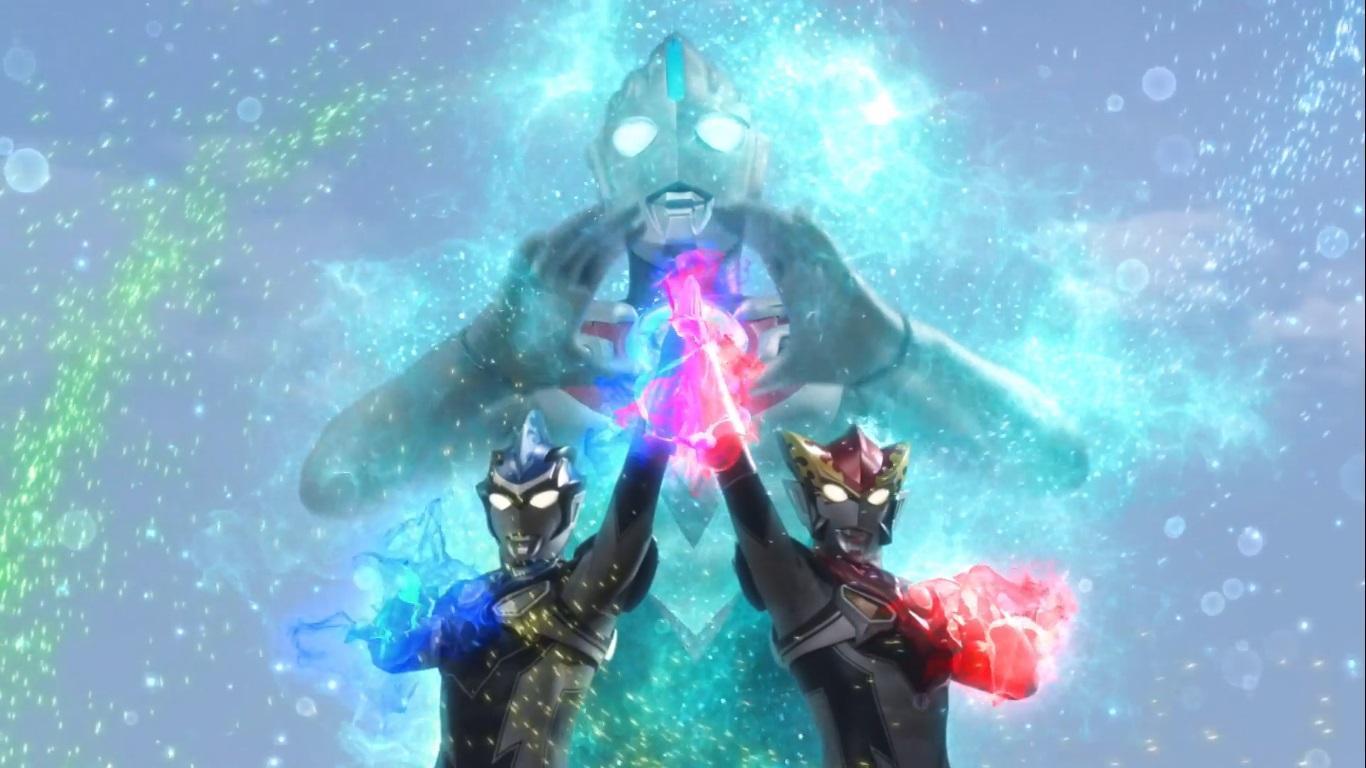 Welcome back to Super Hero Synopses, where sometimes heroes don’t follow the script correctly. This week introduces the mysterious woman (no really, that’s what she’s called in the opening credits) who possesses her own R/B Gyro and seemingly also possesses a very long lifespan based on her comment about knowing a historical figure who died in 1900! She exhibits a particular interest in the brothers’ younger sister Asahi, who seems to have secrets of her own.

Outside of the main story, Orb fans should once again enjoy the numerous references to his show (note the familiar hat and coat hung up in Aizen’s office – I wonder if he cosplayed before he got his own Gyro?) and Horoboros continues to make the kind of impression that will no doubt have him menacing many more Ultramen in the years to come.

What do you think Asahi’s secret might be? How is she related to this mysterious woman? Will the siblings’ father ever be clued in as to what his children are up to? Tell us what you think in our forum or on our Facebook page!

After Horoboros takes out the Minato brothers it’s Makoto Aizen’s (Ultraman Orb Dark) turn to save the day. However, due to his showboating style the city suffers a lot more major damage before Aizen delivers an electric shock to it’s chest, a weakness he seems to be aware of, which stuns the monster and allows him to quickly dispatch it. Aizen changes back to normal and meets the Minato family again.

The brothers are incandescent with rage, so to prove his point Aizen gathers a crowd around him. He quickly whips the crowd into praising Ultraman Orb Dark instead of Rosso and Blu, and chanting his name when he announces that his company will be helping the obsidian hero. The brothers attempt to reveal the truth to the crowd only to be quickly dragged away amid a sea of disbelief. While Aizen basks in the crowd’s adulation, a mysterious woman retrieves Horoboros’ crystal.

Back at the store, the boys’ father attempts to lighten the mood by discussing his latest t-shirt design. Their father realises something is upsetting them and urges them to talk to him, but Isami (Blu) simply storms out while his brother chases after him. Meanwhile at Aizentech, Aizen enjoys a bottle of Ramune while humming “Gai’s Orbnica” (the song which Gai, the original Ultraman Orb, used to play during the show).

As night falls, Asahi and her father discuss her brothers again, as their dad wonders what to do about the situation. Under a bridge, the brothers discuss the meaning of being a hero, and jokingly suggest accepting Aizen’s offer, before agreeing that they have to – and can – stop him.

Makoto Aizen has produced a script for the next ‘episode’ of his legend. To enact his vision, he summons a Bezelb (a monster originally from Ultraman Orb: The Origin Saga) and transforms to oppose it. The crowds of people in the city streets begin cheering for the Ultraman, to Aizen’s delight.

After battling it for a few minutes – and berating the monster when it doesn’t act in accordance with his script – Aizen prepares to defeat the Bezelb, but is interrupted by the arrival of the brothers. Katsumi (Rosso) battles the Bezelb while Isami duels with Aizen. Isami pushes Aizen back for a moment, allowing him to do a combined attack with his brother to defeat the Bezelb.

Asahi arrives at the scene just in time to watch the two Ultraman do a strangely familiar handshake to celebrate their victory. Aizen tears up his script and resolves to defeat the brothers once and for all when the mysterious woman appears again and summons Horoboros, which to the shock of all three Ultramen is now bipedal.

Ultraman R/B, Episode 12
“What We Must Protect”

Makoto is the first to recover form the shock of seeing Horoboros rise, and upon seeing the stunned crowd charges in to act the hero. He delivers a similar shock to before but this time it has no effect. Horoboros responds with a series of slashes that knock Aizen straight out of his transformation, and also sends the Orb Ring Neo fling away to land at Asahi’s feet. She recognises it as her brothers’ property and collects it.

With their Color Timers already flashing, the brothers try the same combination attack that finished of the Bezelb, but Horoboros shrugs it off with ease. It then delivers a one-sided beat down that forces the brothers out of their transformations and leaves them laid prone on the floor, unconscious and injured, in front of their sister. Asahi run over to aid them, while being watched by the mysterious woman, who recalls Horoboros.

The brothers are taken to the hospital, where they must stay overnight for observation. Their father returns home and consoles himself by looking through their mother’s diary. He reads about a time when the boys had been in trouble and she had consoled them by making a hotpot, and decides to cook the same thing for his sons when they are released from hospital. As he puts the book away some photos fall out. He gathers them up but notices one which disturbs him.

The brothers wake up the next morning in hospital. Asahi has stayed at their side all night. They try to make an excuse for why they were caught up in the monster battle, but she reveals that she knows they are the Ultramen. Their conversation is interrupted by sirens, as the mysterious woman has summoned Horoboros once again. The brothers dress in order to go and battle the beast, but Asahi attempts to block them from leaving. Promising to return to explain everything to her, the brothers head out nevertheless.

The brothers decide to use one of their predetermined tactics to try and pin down Horoboros, and transform to face it. Back at the hospital, Asahi notices the Orb Ring Neo calling out to her from within her bag. She grabs it and heads out after her brothers. The brothers successfully enact their plan and stop Horoboros in it’s tracks, but the combination attack they deliver to finish it serves only to free it, with the beast remaining unscathed.

Asahi arrives on scene and watches as the monster delivers blow after blow, once again triggering the brothers’ Color Timers. Asahi holds the Orb Ring Neo in her hands and it responds to her belief in her brothers by glowing again before rising up and flying to them. They each use it to deliver their own ray attacks, before using it to trigger a new move, the ‘Triple Origium Ray’, which summons a spectral version of the original Ultraman Orb to deliver a triple beam attack that finally destroys Horoboros.

As Asahi breathes a sigh of relief, the mysterious woman once again watches her from afar. She then disguises herself as a nurse in order to visit the injured Makoto Aizen, quoting Oscar Wilde and claiming that he was a friend of hers. Back at Quattro M, the sibling are scolded by their father, who had been informed by the hospital that they were missing.

He catches himself and tells them that he hopes one day they will be able to trust him enough to share what they were doing, and the siblings busy themselves with the shop. Their father once again looks at the photo he discovered earlier. He was sure that an infant Asahi had with them on that day, but the photograph only shows him and his two sons…