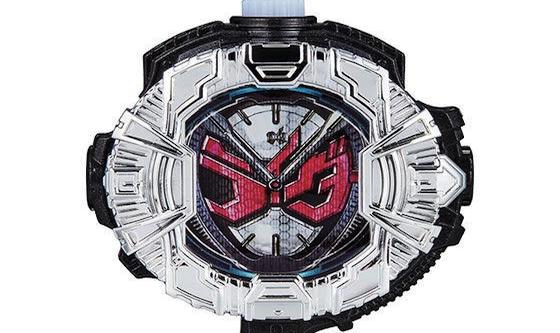 Kamen Rider Zi-O is releasing toys at an insane rate. Ride Watches are coming out literally every week and I plan on covering them all. Here we have the DX Build, Geiz, and Ghost Ride Watches and the DX Ride Watch Holder.

All the Ride Watches function relatively the same way. The Kamen Rider’s symbol and series year are displayed on the face. Rotating that frame reveals the face of Kamen Riders Geiz, Build, or Ghost. They all have a singular button that can be pressed to activate the sounds. The first press is the Rider’s name, the second is a tagline for the Rider in Japanese, of course, and Geiz gets a third line that summons the Time Machine. This third line is specific to Zi-O’s series and is identical and exclusive to Geiz and Zi-O.

All three Ride Watches can be placed into either side of the Driver to give you either Armor Time or Rider Time. Again, this is not specific to any Ride Watch – they are all capable of both. Each Watch then gives the user a unique jingle as well as a unique display on the DX Ziku Driver that consists of the Rider’s name and year they premiered. Here’s where things get a little different. Geiz and Zi-O have finishing attacks whereas the Legend Riders do not. Zi-O had the “Time Break” and Geiz has the “Time Burst”. The “Time Burst” is another unique sound to Geiz’s Ride Watch. The Legend Riders have an additional sound that plays before the attack sound. Build’s Ride Watch says “Voltech” and Ghost’s says “Omega”. These were the finishers for their respective series so, when all put together, the user gets the “Voltech Time Burst/Break” or the “Omega Time Burst/Break”. Overall, this a really cool way for making the same attack sound effect feel fresh and new with each DX Ride Watch released. This gimmick is incredibly fun and I highly recommend anyone who has a DX Ziku Driver to keep getting the DX Ride Watches.

We already covered the DX Ghost Ride Watch above but as for the Ride Watch Holder itself, I have to say this is a great toy as well. The holder is a fresh and unique idea and original concept. Its has a satisfying click when inserting Ride Watches and they are firmly locked in place until the user wants them out. Overall its another excellent toy in Zi-O’s line.