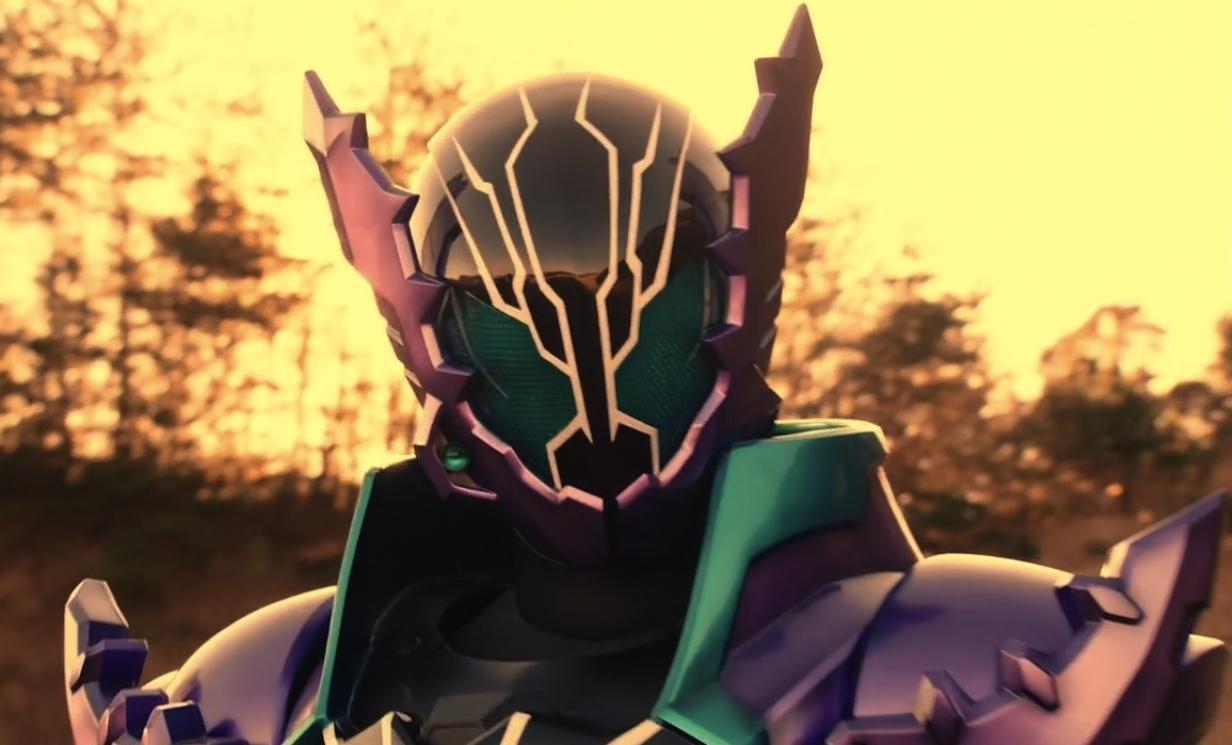 Welcome back to Super Hero Synopses, where we chronicle the latest adventures of Japan’s tokusatsu heroes. It seems we’ve discovered the latest buzzwords over in Toei Towers, as this week a pair of Kaisers supports a villainous Rogue in one series while Lupin Kaizer supports a group of heroic rogues in another. Both shows also seemed determined to show off their cinematography, with Kamen Rider Build concentrating on its use of colour and lighting, whereas Kaito Sentai Lupinranger VS Keisatsu Sentai Patranger dived into the action with handheld camera sequences.

Which show had your blood pumping this week? Did you prefer to see the Lupinrangers speeding through the skies, or did Kamen Rider Grease’s doomed rescue attempt keep you on the edge of your seat? As always, let us know in the comments below.

In the wake of last week’s duel, Misora returns the kill switch to Sento. Kazumi (Kamen Rider Grease) hears Misora’s vocal mannerisms and once again recognizes her as “Mii-tan”. He introduces himself, wanting to shake her hand and take a photo with her. The levity is interrupted when Sento gets a phone call from Touto’s Prime Minister informing him that Seito has conquered Hokuto. Kazumi tries calling Hokuto’s Prime Minister only for the call to be answered by Blood Stark.

Seito’s Prime Minister video calls his Touto counterpart and declares war. He shows live footage of Seito’s guardian robots rounding up everyone on Kazumi’s farm, obviously intending to kill them as a demonstration of power only to be interrupted by Kiba (the Owl Hazard Smash) who has returned home to protect them. Kiba easily defeats the guardian robots only to be confronted by the Washio brothers, who use Gears to become Kaisers (Rider-like villains first seen in the film Kamen Rider Heisei Generations FINAL: Build & Ex-Aid Feat. Legend Rider). Kiba is no match for the two brothers and is captured by them. He is to be held as a hostage to ensure that Kazumi obeys Seito’s orders. Knowing a trap awaits them, Kazumi and Akaba head out to save their friend. Sento and Ryuuga are unable to go with them without risking retaliation to Touto’s citizens, so Sento offers them Hokuto’s Full Bottles back to aid them.

Kazumi and Akaba manage to retrieve Kiba from the brothers, and fly away using the power of the Helicopter Full Bottle. However, just as they get close to the wall, the Remote Control Brother shoots them down. Already badly injured from his time in capture, Kiba starts to dematerialize. When Kazumi refuses to leave him behind, Kiba leaps up to defend him from another shot and is killed. In a rage, Kazumi tries to beat the brothers un-transformed and is knocked out for his troubles. Akaba manages to get him back to the Sky Road and into Touto territory where Sento and Ryuuga are waiting for them. The two take over the battle. Sento initially uses the Hazard Trigger but Ryuuga shoots it out of the driver when he begins to lose control. As the two Touto Riders slowly gain the upper hand over the brothers, Seito’s own Kamen Rider appears. He takes them both on and beats them with ease before revealing his real identity to them.

Can the combined forces of Touto and Hokuto repel Rogue and the Washio brothers? Will Sento ever be able to properly control the Hazard Trigger? Let us know your thoughts in our forum or on our Facebook page.

“The Global Police in Pursuit”

Continuing directly on from their debut transformation at the end of episode one, the Patrangers join the fight between the Lupinrangers and the Ganglers. The Lupinrangers summon their Dial Fighters to escape, but to their surprise the Patrangers summon the Trigger Machines to chase after them. They speed through the city, showing off their vehicles’ various abilities, but the Lupinrangers escape when Patran #1 tries to jump from his vehicle onto Lupin Red’s Dial Fighter and ends up landing in some water.

Back at their bistro, the Lupinrangers stew over their failure to secure the Collection piece and defeat Garatto Nago. Umika questions whether they merely have to steal the item and leave the Gangler to the police, but the other two insist they must also destroy the Ganglers. Kairi returns to the warehouse they infiltrated earlier to see if he can pick up any clues, only to find that the police have made it a crime scene. He watches as Keiichiro apologies to some of the Gangler’s victims and promises to make it pay for destroying their properties. The three Lupinrangers find themselves visiting the sites where they became involved in all this. A flashback reveals that they all had loved ones that were frozen in blocks of ice by a mysterious man in a distinctive hat. The blocks of ice crumbled away to nothing, seemingly causing their loved ones’ deaths. Then Kogure appeared to recruit them as Lupinrangers, promising that their wish to see their loved ones returned to life could be granted if they reclaim the Lupin Collection for Kogure’s unnamed master.

Stinging from his earlier failure, Garatto Nago appears, determined to steal everything and burn as much down as possible in the process. Both Sentai immediately respond. The Lupinrangers arrive first and attack, quickly reclaiming the piece of the Lupin Collection without their police counterparts around to interfere. The Patrangers arrive and also transform. Another three-way battle develops, until Lupin Red decides to pull his team out, recalling the promise he saw Keiichiro make and leaving the Patrangers to fight the Ganglers. After demonstrating their Pat MegaBos, the Patrangers unveil the Good Striker, using its power to merge the three of them into a single combined being, Patran #4, which destroys their foe with a single shot.

Watching from his mansion in the Ganglers’ dimension, Dogranio Yabun decides to give his minion one more chance, and sends Goshu to help him out. She appears on the scene and uses her piece of the Collection to make Garatto into a giant. The Lupinrangers summon their Dial Fighters and fly in to attack. The Good Striker flies away from the Patrangers and gets Lupin Red to make it grow to full size using his VS Changer. It then combines with the Dial Fighters to form LupinKaizer. LupinKaizer easily blasts Garatto away, though not without causing a lot of damage to the nearby buildings. Back at the bistro, the Lupinrangers are discussing their next move and playing with Good Striker when the Patrangers walk in. Are they just customers, or have the phantom thieves been discovered already?

Who is this mysterious sombreroed man? Who is the anonymous owner of the Lupin Collection? Will we get to see Pat Kaizer do a patented DekaRobo roll? Let us know your thoughts in our forum or on our Facebook page.