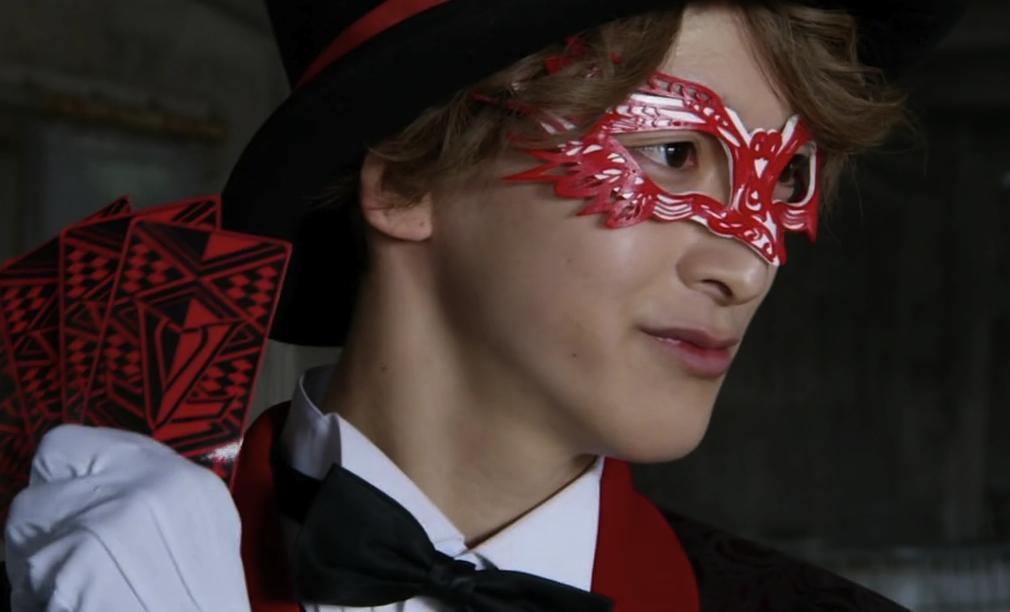 Welcome to the first edition of Super Hero Synopses, the latest ongoing feature here at Henshin Justice Unlimited, and your place to catch up on recent events in the ever-changing world of the special-effects action shows we hold so dear. Here, you can offer your thoughts on what’s been happening in the tokusatsu subgenre. Let us know what you think in the comments section below or anywhere the HJU banner flies. And who knows. Maybe your words will be highlighted in an upcoming feature on the site.

This week saw the premiere of a brand new team (or two) in the Super Sentai franchise, and a new challenger enters the scene over on Kamen Rider. Are you caught up? Tell us your favorite moment, what you think didn’t work, or what you hope to see in the future. All well-meaning opinions are welcome as the Year of Justice rumbles onward.

“The Thieves That Everyone’s Talking About”

In a mysterious casino a man is unknowingly cheated out of his money by the establishment’s manager, who uses special powers to manipulate the roulette wheel. Suddenly, three figures jump in through the window and throw a calling card at him that causes him to reveal his true, monstrous form. The Gangler sends his footsoldiers after them but the phantom thieves fight their way through and remove the item hidden in a safe embedded in the monster’s stomach. The Lupinrangers continue to fight the footsoldiers until they are interrupted by the arrival of three members of the Global Police. The three Lupinrangers shoot the Gangler, destroying it, before making their escape in LupinRed’s Dial Fighter.

The next day, the media is buzzing with reports of these infamous phantom thieves and they are the talk of the town. Kairi sits at an open air table sipping a drink and looking at the reports on his phone. Keiichiro sits on a nearby bench, reading a newspaper and getting increasingly frustrated as the people nearby praise the Lupinrangers for being more effective against the Ganglers than the Global Police. Kairi gets picked up by the butler Kogure, who provides him with an envelope containing the Lupinrangers’ next target, then returns him to the bistro where the Lupinrangers work during the day. Meanwhile, at the Ganglers base in another dimension, a party is taking place to celebrate the 999th birthday of their boss, Dogranio Yabun. He has tired of his life of crime, and announces that whichever member of the Ganglers can take over the human world will become his successor.

The Lupinrangers head out on their next job. They infiltrate the pierside factory that the Gangler member has taken over but are discovered. Meanwhile, at the Global Police station, Commander Hilltop issues his officers with some new equipment, just as a report comes in of Gangler activity. The Lupinrangers fight the Gangler and his footsoldiers, but are surprised when he turns out to be less humanoid than they expected, and he captures Touma and Umika. Kairi shoots the roof above the Gangler’s head, providing the distraction for the others to get free and they transform. The battle drifts outside, but just when it seems that the Lupinrangers have gained the upper hand, they are once again interrupted by the Global Police officers. This time they have their own VS Changers, and transform into the Patrangers!

Are you ‘Team Lupin’ or ‘Team Pat’? Let us know in the comments below!

Come and tell us on Facebook which of these two new Reds you prefer, or join us in our forum and tell us what expectations you have for this new season!

Note: The events in this episode are not presented in chronological order. However, for the sake of clarity this summary will be.

The night before the Rider duel, Sento informs Banjou that the battle will be between Grease and Build rather than Grease and Cross-Z, causing Banjou to angrily storm out of the cafe. Sento hands an unusual bottle to Misora and explains that it is a literal kill switch to stop him in the event that the Hazard Trigger causes him to lose control and he attempts to kill someone. Misora initially refuses to take the device but ends up keeping it.

The day of the duel arrives, and Hokuto’s Prime Minister secretly sends all their troops to march into Touto to complete their invasion regardless of the outcome of the duel. The fight begins, with Misora, Sawa and the two remaining members of the Hokuto Crows watching on. Build surprises Grease by using new Best Matches from the Hokuto Bottles provided by Blood Stark. However, Grease recalls everything him and his friends have gone through (revealing to the audience that he hasn’t actually lost his memories as he claims) and uses that to dig in and keep fighting. But when Build uses the Hazard Trigger, it’s only a matter of time until Grease is defeated, making Touto the winners of the duel. Regardless, Sento has lost control again, and it seems that he is going to continue attacking Kazumi even though he is no longer transformed. Sawa has gone to inform Banjou about the kill switch and Banjou arrives just in time to stop Sento from killing Kazumi. Banjou is able to master the powers of his Charge form to battle Sento to a standstill and bring him back to his senses. On the sidelines, Kazumi reflects that he was unable to avenge his fallen friend. Meanwhile, in Hokuto, Seito forces suddenly rush in and capture the government building, including their Prime Minister. Stark reveals he was never on their side anyway, and greets the new Rider from Seito.

Which was your favorite of the Best Matches that debuted this episode? Tell us in the comments below!

How long will it be until someone snaps under the weight of all this guilt? Will the new Rider be a character we know or another new person? Join the discussion on Facebook and our forum.

You might also like:
LUPINRANGER VS PATRANGER Episode 1: This is Also All Lupinranger’s Fault
KAMEN RIDER BUILD Episode 22 May Elevate the Series to Masterpiece Status
UCHUU SENTAI KYURANGER Wrap-Up: Space is Disease Wrapped in Darkness and Silence