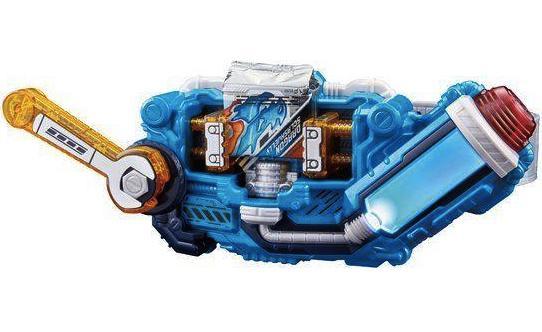 As is standard now, every Kamen Rider series seems to need at least 2 transformation belts. Kamen Rider Build‘s second one is the Sclush (Sclash) Driver. This is a much more solid toy than I imagined it’d be but as per usual, being a secondary Driver, it has far fewer sounds and can read far fewer Full Bottles than the DX Build Driver. It basically only reads the Dragon, Robot and Crocodile Fullbottles/Jellys giving them both a henshin sound and a finisher. Other than that, this thing only reads the remaining Fullbottles as “organic” or “inorganic”. Surprisingly though, this Driver comes with both Jellys for Cross Charge and Grease (Rogues will be released next month) so for the most part it’s a solid single purchase instead of the DX Build Driver that requires more and more Fullbottles to keep itself relevant and complete. I do still think the Build Driver is better, but if you can only afford one purchase and keeping up with Fullbottles is too much for you then this is the Driver for you.

Not only do new Riders mean new belts but also new weapons. The DX Twin Breaker is a pretty solid weapon toy and, compared to the rest of Build’s toy line, it sits in the middle of the road. There are better toys for sure, but there are far worse for the same price. The weapon features a melee mode and a blaster mode for both long and short range combat. The back of the weapon has an opening for any one of the Build gimmicks, Fullbottles, Jellies or “double items” (Rabbit Tank Sparkling Can or Cross Dragon). These items can make 3 different finishers, one for a single Fullbottle, one for two Fullbottes and one for a “double item”. Overall, this is pretty good. Weapons like the Steam Blade, Steam Gun and Beat Crosser are still far better but this toy is far more worth the money then the Hawkgatlinger, 4 coma Ninpoto, and the Kaizoku Hassher. It does a fair amount for its price point and overall I like it, but again, there are better.

For this and other Kamen Rider and Tokusatsu merchandise, check out CSToys and BigBadToyStore.