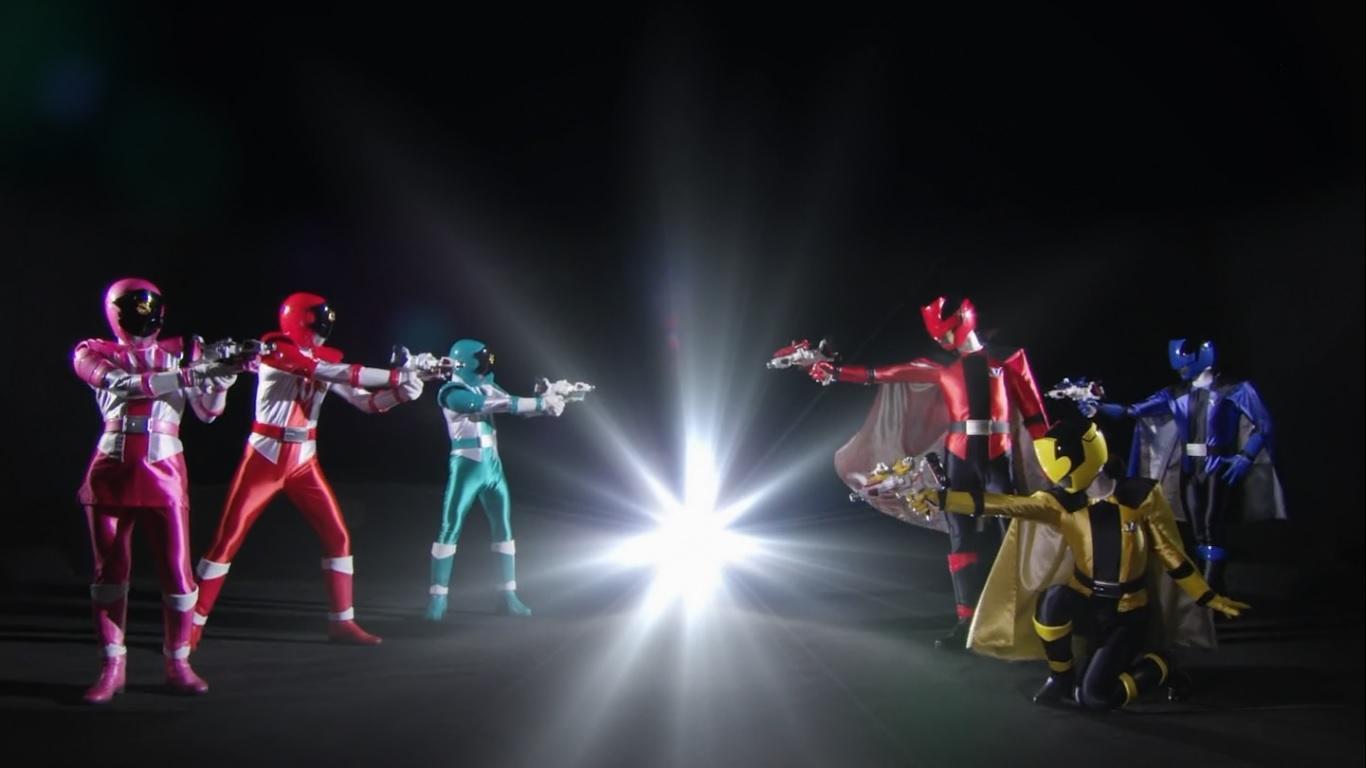 Welcome back to Super Hero Synopses, your weekly record of the paths our heroes must walk upon in a bid to become new legends. This week we’re mostly transcribing painful memories as Kamen Rider Build explores the trials Gentoku underwent in order to become Kamen Rider Rogue, and Kaito Sentai Lupinranger VS Keisatsu Sentai Patranger digs down to uncover the motivation driving our newest blue ranger to a life of crime. But it isn’t all flashbacks of miserable experiences, as the mysteries behind Misora and Kogure deepen further.

As always, please feel free to leave your comments in the section below or anywhere else in the world of HJU. We’d love to know how you think these shows are stacking up, not just against each other but within their own franchises too. Also, please keep an eye out for our other articles where Doc gives a deeper analysis of these ongoing shows.

On the battlefield, Gentoku narrates the story of how he became Kamen Rider Rogue. After being exiled from Touto he went to Nanba Heavy Industries’ Seito branch, where Utsumi forces him to swallow his pride and beg on the ground. He was then imprisoned for a time before Stark came for him. Stark’s process seems to mostly consist of having Guardian robots fight Gentoku until he’s either dead or unlocks the power of the Crocodile Crack Full Bottle. Gentoku proclaims that he went through hell before he mastered the bottle, and wants to give the other Riders a taste of what he went through. Sento reports back to Touto’s Prime Minister, who suggests that Pandora’s Box be moved as soon as possible as Gentoku will know it’s location. The office has been bugged by Seito’s Prime Minister, who is listening to their conversation alongside Gentoku.

Sento goes to leave bouquets of yellow and blue flowers at the site where Aoba died. Stark confronts him, demanding back the Full Bottles he previously gave him. Sento fights him in RabbitTank Sparkling form only to end up losing some of his bottles to Stark. He uses the Hazard Trigger to keep fighting Stark, who urges him to keep getting stronger even after Sento loses control of the device. They are interrupted by Kazumi, who delivers a rider kick to Sento to cancel his transformation. Stark retreats and Kazumi asks Sento to fight with him to free his family and friends in Hokuto. Much to the dismay of Ryuga and Misora, Kazumi and Akaba move into the cafe with them. While Ryuga and Kazumi banter, Sento slips away to his lab. Misora follows him and tries to cheer him up. Sento doubts whether they have managed to protect Touto at all and recalls happier pre-war days when he was a fighting for “love and peace!” Misora’s bracelet begins to glow and she collapses. Sento and Ryuga run to help her only to be interrupted by a call for help.

Gentoku and the Washio brothers are attacking the Prime Minister’s office to steal Pandora’s Box. By the time they get there Gentoku has already forced his father to reveal the box. Gentoku transforms only to then use the Phoenix Full Bottle to blast through the wall and escape. Sento follows him using HawkGatling. Outside, Kazumi uses the Helicopter Bottle to fly after them while carrying Akaba, and Ryuga has to follow on foot. Seito’s forces are able to defeat the combined Touto and Hokuto forces with ease. As Gentoku closes in on Sento to finish him off, suddenly Misora appears. Her bracelet is glowing again and when she opens her eyes they’re glowing green…

What do you think will happen to Misora? How long will Rogue’s winning streak last? What is Stark trying to achieve? Let us know your theories in our forum or on our Facebook page.

“We Will Get Them Back”

Following on from last week’s cliff-hanger, the Patrangers have entered the bistro where the Lupinrangers work…and it turns out they’re just customers. Keiichiro (Patran #1) asks Kairi (LupinRed) if they’ve met before and Kairi pretends that they haven’t. Touma (LupinBlue) moves to try and steal Sakuya’s (Patran #2) VS Changer but Kairi stops him. Meanwhile, Umika (LupinYellow) notices that Good Striker has run away. The Patrangers are interrupted by an emergency call and leave. As soon as they’ve gone Kogure appears at another table to collect last week’s Collection piece and give the Lupinrangers their latest assignment. Rather conveniently, their new target is the very same Gangler the Patrangers were called away to deal with. Both teams go to confront the Gangler, Nahmero, only to end up focussing more on fighting each other. Nahmero sprays a sticky substance around and Sakuya almost immediately gets stuck to the ground. Touma takes his VS Changer only to be attacked by Tsukasa (Patran #3) who retrieves the stolen device. Nahmero flees, hinting that they’re welcome to follow him but they might be the ones who get caught. The Lupinrangers retreat while the Patrangers have to free their trapped member.

Kairi and Touma butt heads over whether or not to try and steal the Patrangers’ VS Changers. Touma is rushing to complete their task while Kairi seems to be overly cautious. Touma storms off and the Good Striker accidentally stops Kairi and Umika chasing after him. Touma recalls the person he’s trying to revive, Aya. He remembers the time her proposed to her, while they eat a meal he cooked for them both. He wasn’t interested in cooking before he met her, but she encouraged him and he found it fun. Then he recalls the day she was frozen. Back in the present, he declares aloud that he will do whatever it takes to get Aya back, only for Kairi to catch up with him. Kairi points out that if any of them get caught it makes the task more difficult for the other two, but that the police could be manipulated into acting to their advantage.

Back at the station, Keiichiro is chewing Sakuya out for almost losing his changer. They are interrupted by a call from an “anonymous citizen” informing them where Nahmero is. As the Patrangers leave to act on the tip, Sakuya gets a brief pep talk from Commander Hilltop. The Patrangers storm the studio where Nahmero is hiding out, only to become caught in the trap he’d hinted at earlier; All three of them get pinned in place by his sticky goop. Nahmero runs outside only to find the Lupinrangers waiting for him. Kairi tells Touma how they can use the Patrangers like this to give them more options. Recalling his earlier experience with Aya, Touma concedes that Kairi may be right. The three transform and battle Nahmero, successfully stealing his treasure.

Recalling Hilltop’s earlier words, Sakuya finds a way to free himself and his two comrades from the trap. Outside, Kairi decides to try using the Good Striker to merge the three of them together, only to find that instead it creates two additional copies of him. The five Lupinrangers attack Nahmero together to defeat him. However, the Good Striker runs away when they mention Kogure’s name and runs into Keiichiro. Goshu appears to make Nahmero grow, and the Patrangers summon their Trigger Machines and make Good Striker grow to full size, allowing them to form Pat Kaiser. Pat Kaiser battles and defeats Nahmero for a second time. The Patrangers are then surprised when Good Striker’s puppet form appears from Patran #1’s controls, sporting a police cap instead of his previous top hat. Then Good Striker cancels the transformation and flies away from both teams. Back at the bistro, Kogure mentions that the Good Striker has always been “difficult to handle” and hints that he may be responsible for the Patrangers procuring their VS Changers. Kogure vanishes as the Patrangers enter the bistro. In the kitchen, Touma says that they should put laxatives in the Patrangers’ food in order to give them an opening to steal their changers. He’s only joking though…for now.

Are there any Choriki Sentai Ohranger / Power Rangers Zeo fans out there who found this Lupin Collection treasure strangely familiar? Am I the only one who suspects Kogure isn’t being entirely truthful to the Lupinrangers? What have your first impressions been of the two teams? Let us know your thoughts in our forum or on our Facebook page.