If you’re one of the five people left that doesn’t yet know the greatness that is Black Panther, Marvel Studios’ latest entry in their indomitable Cinematic Universe, don’t worry. Even the original Kamen Rider gives it his stamp of approval. Game respects game, apparently. The first of a long legacy of superheroes in the Land of the Rising Sun, actor and martial artist Fujioka Hiroshi battled the forces of evil in 1971 as the avenging cyborg hero Kamen Rider Ichigo, and once he had made Japan safe from villainous hands (for a while anyway) he set out on a quest to free the rest of the world from the tightening grip of super-terrorism. Which brings him, seemingly, on his quest to find the mysterious land of Wakanda. No foolin! Fujioka actually states that he went on a quest to find Black Panther’s homeland.

He appeared at a press event for the film’s official Japanese release, surprising an audience who had just been left in the dark, literally. When the lights came back on, Fujioka took to the stage for an unannounced visit. A video preceded his arrival which depicted him as traveling to Africa in search of the technologically advanced nation, hidden from curious eyes for ages. Fujioka claims that, though he went in search of T’Challa’s kingdom, he ultimately failed.

He’s joined on stage by Momoto Kanako of the pop music group Momoiro Clover Z (which happens to have performed theme music for anime sensations Dragon Ball, Sailor Moon, and Pokemon). She serves as the Japanese dub voice of Shuri, King T’Challa’s lovable genius sister in the new film. Among the rest of Japan’s voice cast are Tsuda Kenjiro, who played the green Helheim Overlord Redyue in Kamen Rider Gaim, Morikawa Toshiyuki, best known as the exceedingly brave bird-man Torin of Zyuden Sentai Kyoryuger, and Nakai Kazuya, who found luck as space-dog OokamiBlue in Uchuu Sentai Kyuranger after saving the Earth as the alien hero voice of Ultraman Max. So, a lot of extraterrestrials in the cast.

Fujioka Hiroshi, not part of the Black Panther dub team, was a stunner for the audience of some 500 who sat ready to check out the film, though this doesn’t make for his first-ever promotional appearance for a property fans might not immediately expect if they only know him as the invincible two-fisted insect. He’s crossed paths with a few others on his long road through the land of justice, and not just with his countless successors in the Kamen Rider franchise. 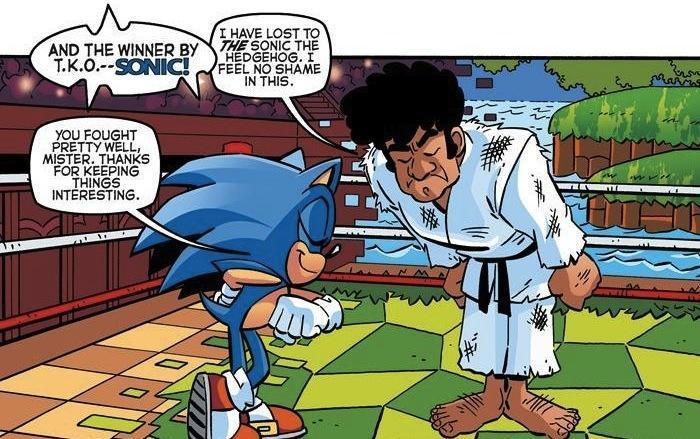 Yes, you’re reading that right. It’s Fujioka Hiroshi in a comic book panel in which he faces, of all things, the blue video game hero Sonic the Hedgehog. Although, technically speaking, it’s actually Segata Sanshiro, the character Fujioka played for years in a string of promo materials for the Sega game company.

Here’s Fujioka in a ramen noodle ad that cannot be described, only seen to be believed.

There are no words. This would be like if Michael Keaton (1989’s Batman) showed up in a McDonald’s commercial instead of the actual movie he starred in about the founding of McDonald’s, and then turned himself into a bargain bin version of the Tumbler from The Dark Knight for a Batman Beyond lookalike to ride on while Budget Pennywise screams “Hit me!” and the only thing saving our heroes in their hour of need is a delicious McRib.

Suffice it to say, you don’t get to do all of this without being an original MVP. It’s only natural then that he gives due props to the newest figure to join his illustrious circle.

In a Q&A session, Fujioka had this to say about the movie:

“This story is about the birth of a new hero. The action in the film is excellent, but there is also a sentimental gesture and a message. This is truly wonderful!”

When asked to define what being a hero means to him, he answered: