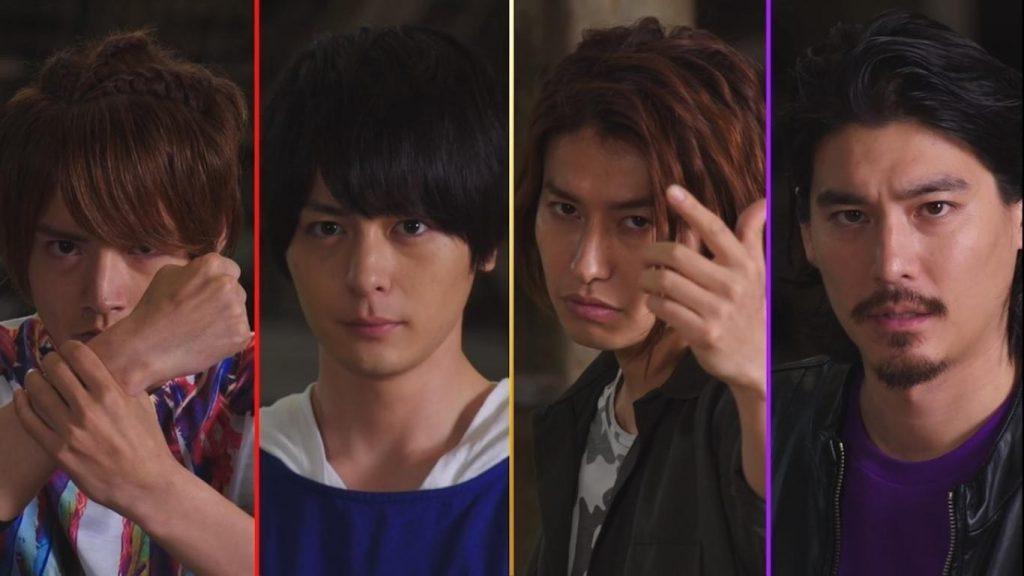 Welcome back to Super Hero Synopses, where the key to victory is having faith in your friends! Once again, Sento is trying to carry all the weight of his problems by himself and once again his fellow heroes in Kamen Rider Build come to his aid to prove that their teamwork can defeat even the most powerful of alien forces…or can it? Kaito Sentai Lupinranger VS Keisatsu Sentai Patranger sees Noel setting up a sting operation, for which he requires Touma’s cooking abilities. Things nearly go wrong when they find themselves facing an entire sub-unit of the Ganglers, but by trusting in each others’ abilities they make it through and away with more treasure!

Is Shinobu (Sento’s dad) a villain or a hero? Will Kazumi and Gentoku rue receiving another dose of Nebula Gas? Is Touma’s newfound trust in Noel well placed or not? feel free to discuss these toku series or any others in our forum, over on our Facebook page, or in the comments below. If you enjoyed this article, please share it with your friends and check out the other features here at Henshin Justice Unlimited!

While Sento (Build) checks over Ryuga (Cross-Z) and introduces another power-up item, Kazumi (Grease) and Gentoku (Rogue) are infiltrating Evolt’s hideout. The two are captured and forced into Nebula Gas chambers in order to change them into Lost Smashes. However, the pair quickly break out of the chambers, admitting that they allowed themselves to be captured in order to be dosed and raise their Hazard Levels. They flee with Nariaki (Mad Rogue) hot on their heels. Still recovering from the chambers, they are unable to get away but Sento and Ryuga arrive to rescue them. As Ryuga flies away with them Sento once again battle his father, who is able to temporarily restrain his son by hitting the Hazard Trigger, only to then allow him to escape.

While Kazumi fawns over a Mii-tan body pillow, Sento gets to work on completing Ryuga’s power-up. He’s clearly rushing and Ryuga is injured while testing the new device. While taking a break Sento is contacted by Evolt who demands the Lost Bottle he possesses. That night, while the others sleep, Sento speculates that his father was trying to give him a clue to defeating Evolt, as his Hazard Trigger is similar enough to the Evol Trigger that a similar impact could also restrain Evolt. Sento slips away to confront the alien. As they are about to fight the other Riders appear at his side, having planted a tracker on the new device and followed him. All four Riders transform and attack Evolt.

The battle is hard on the Riders initially as Evolt is stronger than ever, but the teamwork of the Riders gives them the edge. While Kazumi and Gentoku use their finishers to keep him in place, Ryuga uses his new Blizzard Knuckle to hit the Evol Trigger, preventing Evolt from dodging Sento’s Rider Kick and destroying him. As the other Riders celebrate Sento retrieves three Lost bottles from the scorched remains of Evolt, only for his father to appear and steal them out of his hand.

Is Evolt truly dead, or will he return to life? Do you think the Blizzard Knuckle should have gone to one of the other Riders who received fewer power-ups? How long will it take Premium Bandai to start making real Mii-tan body pillows? Give us your predictions in the comments below or come and join the discussions in our forum.

Due to his cooking skills, Noel (X) recruits Touma (Lupin Blue) for a sting operation against a Gangler that is kidnapping cookery teachers. Touma agrees, but it’s clear that he doesn’t trust the turncoat. The two set up classes with Noel posing as Touma’s assistant. The only male student quickly reveals himself as a Gangler, Ushibarock, and kidnaps the pair. He takes them to a docked ship, with the other two Lupinrangers trailing behind them. Noel and Touma quickly find the Gangler and engage with him, only to discover that he is part of a trio known as the Lymon Gang. Touma attempts to crack Lymon’s golden safe only to discover that his VS Vehicle cannot break the lock. Lymon swats him away and damages his VS Vehicle, cancelling Touma’s transformation. Noel quickly gets them out of there before the Ganglers can discover that Lupin Blue is the kidnapped chef.

Noel sends the Good Striker to fetch the other Lupinrangers, while Ushibarock uses the ship’s intercom to challenge Touma to a cookery contest. Noel convinces Touma to accept the challenge in order to provide him with time to his Touma’s VS Vehicle. Following a cooking montage, Ushibarock and Touma present their completed dishes to the other Lymon Gang members, where Touma’s cooking blows them away. Ushibarock is enraged by his loss and attacks Touma just as Noel arrives with his repaired VS Vehicle. The pair transform and are joined by Kairi (Lupin Red) and Umika (Lupin Yellow).

The Lupinrangers move the battle to the docks but struggle against the trio of strong Ganglers. Noel and Touma manage to take the contents of Ushibarock’s safe but Kairi and Umika are unable to prevent the other two from escaping. When Ushibarock becomes a giant, Noel asks Touma and Umika to summon his train VS Vehicles in addition to their own, combining to form both Lupin Kaiser and X-Emperor. The two mechs briefly trade their arm components before X-Emperor finishes Ushibarock for good. While Noel goes to report to the Global Police, Kairi and Umika get Touma to reluctantly admit that he now trusts the newcomer.

Will the Lupinrangers find a way to break the locks of the ‘Status Gold’ Ganglers? Did you enjoy the pairing of Noel and Touma? Which Sentai villain do you think is the best cook? Let us know your thoughts on our Facebook page or in the comments below.

SUPER HERO SYNOPSES | Why you got to be so R/B? Watch: GOSEI SENTAI DAIRANGER Retrospective