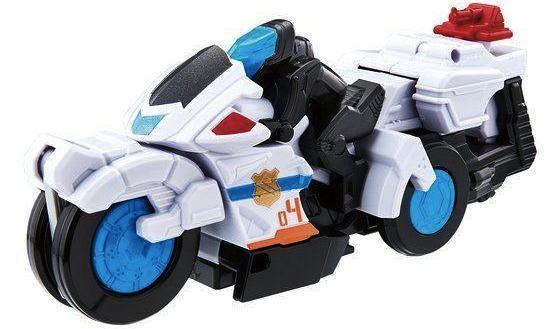 Kaitou Sentai Lupinranger VS Keisatsu Sentai Patranger has proven to be an excellent Super Sentai series, but its toy-line… Well, it’s hit and miss. Today, we have the DX Cyclone Dial Fighter and the DX Trigger Machine Biker to talk about. And, while the Biker is clearly better than the Cyclone, neither are too amazing.

The Cyclone Dial Fighter is the first upgrade item for the Lupinrangers. As a helicopter, it’s pretty cool, mostly green with a unique aesthetic to it. I really like it in this mode. The dial opens up the propeller blades and, well, this is where the toy falls apart. As an “arm”, if you can even call it that at this point, it looks awful. Now, in fairness, it’s show accurate but it just looks like a broken helicopter attached to a robot. Thankfully, the sounds and interaction with the VS Changer are more positive. The new finishing attack you get is our first Kaitou Boost, with awesome wind-like sound effects that match the attack in the show. Then there’s the summon sound, and while it’s pretty similar to the past 4, it’s still awesome.

As for the Biker, I have pretty much the same pros and cons for it. As a bike, it’s awesome! I love the aesthetic of this thing right down to the little rider on it. Also, in the VS Changer, it sounds amazing, giving us our first Keisatsu Boost as well as a great summoning sound effect. Though again, as an arm, this thing doesn’t look great. To be fair, it’s better than the Cyclone arm, but the gimmick is weak and the final product is just okay at best. Overall, I recommend these two as accessories to the DX VS Changer rather than accessories to LupinKaiser and PatKaiser. The fun of these guys comes, almost 100%, from the gun, and I feel like people with the VS Changer are going to like this more than those who just bought the mecha.