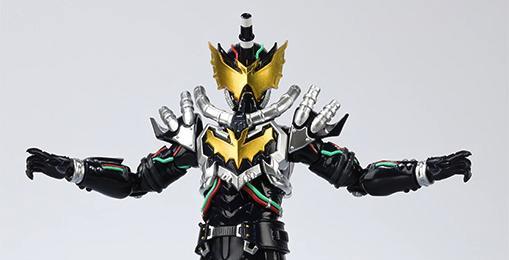 At last, his magnificence is upon us. Like a bat out of Faust’s evil underground lair, the villainous Night Rogue emerges from the Kamen Rider Build television series, finally getting his shine with this S.H. Figuarts item from toy godsend Bandai Tamashii Nations.

Recently revealed as Himuro Gentoku, the duplicitous son of the Touto Prime Minister, Night Rogue acts as a leading member of the shadow organization Faust, conducting dangerous experiments on human subjects. And, in keeping with classic Kamen Rider tradition, as a key antagonist of the show, his theme is that of the bat.

With a pose that screams “come at me, bro”, this bad mamma-jamma is armed with his Steam Blade and Transteam Gun. These weapons combine to form the Steam Rifle. And did I mention the steam?