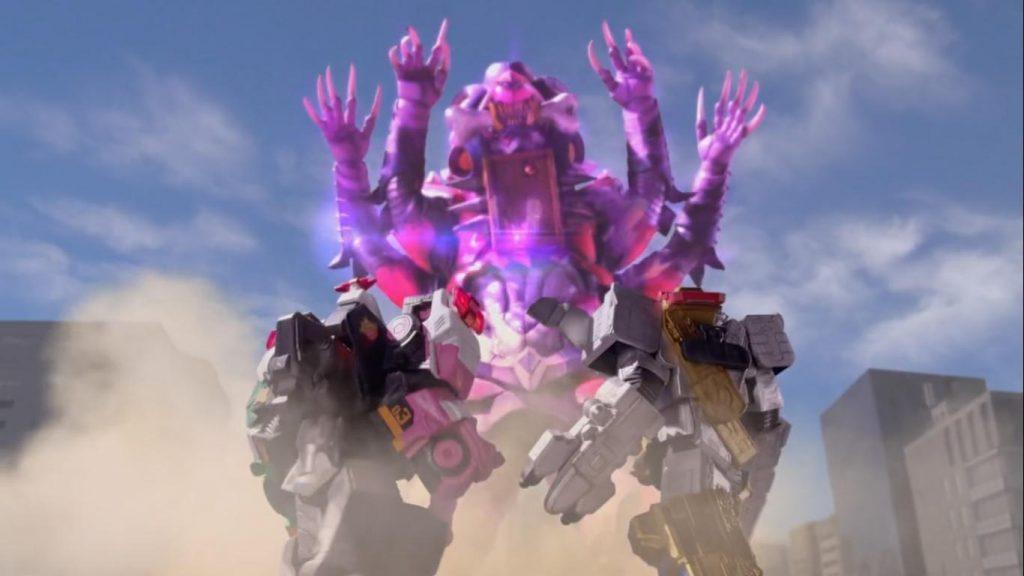 Welcome back to Super Hero Synopses, where promises to parental figures must always be kept. Sento’s father persuades him to continue his work in this week’s Kamen Rider Build, though we will have to see whether the white panel is revealed within the remaining four episodes, as the sponsors’ message card in this week’s episode revealed that the movie Kamen Rider Build: Be The One takes place between this episode and the next one, rather than after the series finale as had been previously advertised. Over in Kaito Sentai Lupinranger VS Keisatsu Sentai Patranger we discover that Kairi and Tsukasa had similar childhood experiences but the promise Tsukasa made to her grandfather looks to be severely tested by Lymon. Luckily I’m confident they have a combination to ensure she can uphold it.

Which character will Evolt possess next? Will the power-ups introduced in Build’s summer movie make an appearance in the show’s final run of episodes? Will the Lupinrangers and Patrangers get along when forced to share a cockpit again? Share your predictions with us on our Facebook page or in our forum and please check out the other articles here at Henshin Justice Unlimited!

Shinobu Katsuragi (the other Build) gathers the Lost Bottles and seals Evolt’s Driver inside a special container, before leading the Riders inside Pandora’s Tower. Shinobu explains that he was waiting for this chance to betray Evolt, though Sento (Build) insists that he must have had previous opportunities. Shinobu explains that when the black panel is completed it allows instantaneous travel between worlds, which Evolt seeks in order to remove his need to recover and regain energy from traveling to another world before he can consume it.

They are interrupted by Nariaki (Mad Rogue), who has been possessed by Evolt. He deploys a tentacle that flies straight through Shinobu’s chest, killing him. While the other Riders engage Evolt, Shinobu gives Sento one final task to complete before passing away in his son’s arms. Evolt shoots a blast at Kazumi (Grease) that seems to consume him. Gentoku (Rogue) manages to eject Kazumi’s Sclashjelly before he takes lethal damage. Evolt retrieves his usual Driver from the container and separates himself from Nariaki. Gentoku evacuates them all, bring Pandora’s Box but leaving the black panel behind.

While the others attend to the still-unconscious Kazumi and watch a news report of the “Prime Minister’s” new appointment of regional governors, Sento ponders his father’s last words concerning a white Pandora panel and debates with his inner self (Takumi) whether or not to trust him. They are disturbed by a mass attack of Smashes lead, and Evolt springs his trap. A possessed Kazumi wakes up in the cafe and knocks out Sawa and Misora before bringing the final Lost Bottle to Evolt. Evolt tosses Kazumi aside and merges with the completed black panel, gaining a new, even stronger form. He takes Sento along as he travels to another world and consumes it, gaining even more strength. Sento remembers joking with his father about saving the world, and this re-focuses him on what must be done. He leads the Riders joint attack and manages to use his power to purify two of the Bottles, separating the panel from Evolt and causing him to retreat for another day.

What will the white Pandora panel do? Was Shinobu an ally or enemy of Evolt? Was it just me or did the world destroyed by Evolt really look like Gaim’s world? Please share your thoughts and predictions for the show’s final four episodes with us on our Facebook page or in the comments below.

Kairi (Lupin Red) is searching fruitlessly for some clue as to where they can find another Gangler to target. He hears a group of customers talking about their new lucky pendants. After questioning them he follows the lead to a club where the shifty owner is selling the pendants in a darkened corner. Kairi approaches him to buy when when the Global Police raid the club. The owner approaches the police and reveals himself to be Giwi from the Lymon Gang. Tsukasa (Patren #3) recognises Kairi and evacuates him while the other Patrangers push back the Podermen.

Outside the building Tsukasa questions why Kairi is there and then confiscates the pendant from him. She inadvertently reveals that she knows a lot about him and admits that the officers had checked his background. She reminisces about being raised by her grandfather due to her parents’ early deaths. She makes a comparison to Kairi being raised by his brother, earning some ire from him before he points out that being a police officer isn’t exactly living a peaceful life with her grandfather. She replies that she had promised him she will always come back alive, before being interrupted by a message informing her that Giwi has escaped.

The pendants that had already been sold begin to sprout and cover their wearers in foliage. The Lupinrangers track Giwi down first and attack him, with the Patrangers hot on their heels. However, thanks to his Collection piece Giwi can avoid any attack aimed at him. Tsukasa contemplates using the pendant she took from Kairi earlier but is cautious of the consequences. Kairi snatches the pendant from her, and uses its ability wear down the Gangler enough for Touma (Lupin Blue) to crack his safe before Kairi is entangled by foliage. The Patrangers take Giwi out and summon their mechs to fight his giant form. Zamigo watches their battle and is approached by Lymon with an offer. The Pantranger defeat Giwi only for Lymon to appear as a giant so large he even dwarfs their mechs, which he then begins attacking.

What was the offer that Lymon made to Zamigo? Is this building to finally bringing Zamigo into the story properly? Can Lymon just size-change at will? Let us know what you think in the comments below or come and join the discussions in our forum.