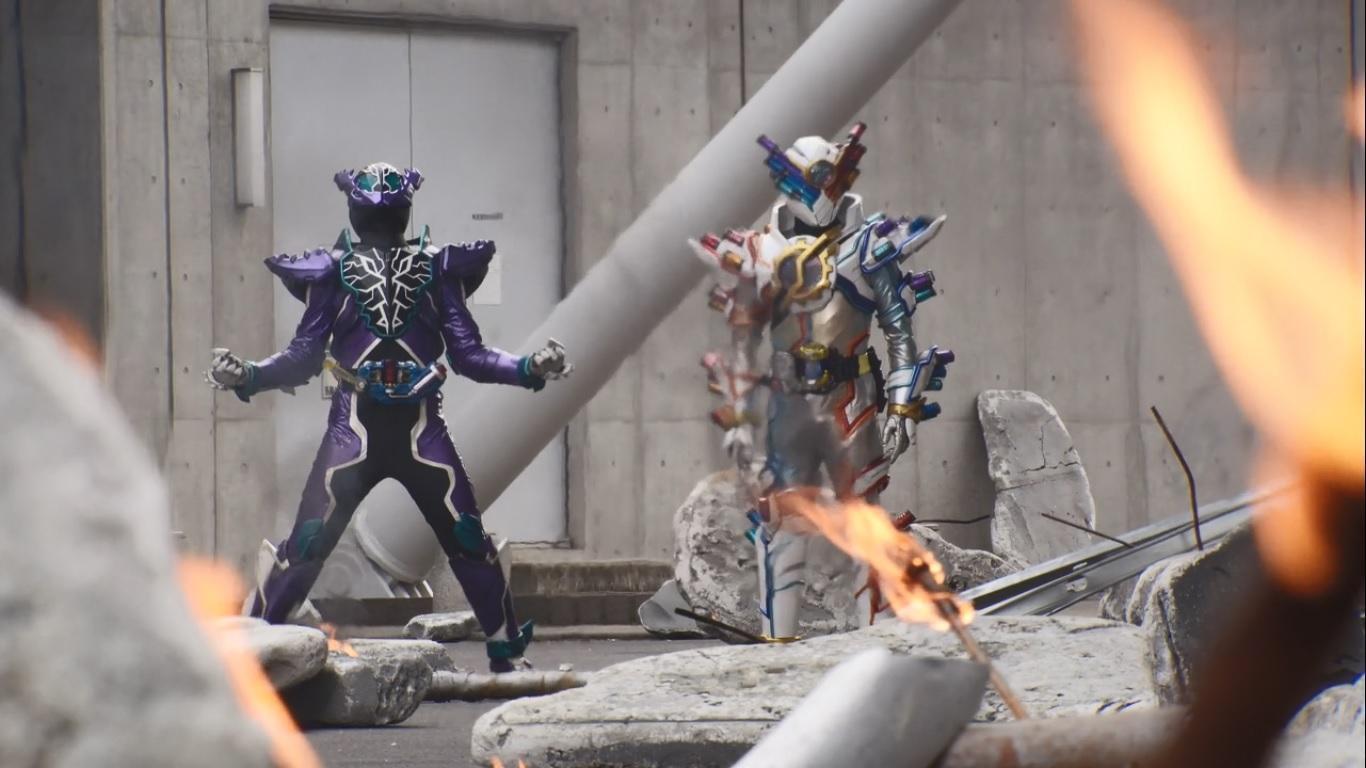 Welcome back to Super Hero Synopses, where every newcomer seems determined to keep their true intention as ambiguous as possible. Kamen Rider Build witnesses the reunification of Japan but Sento’s focus is to investigate his father’s intentions, which remain as inscrutable as ever. Noel’s big introduction to Kaito Sentai Lupinranger VS Keisatsu Sentai Patranger sees the two-in-one ranger immediately enacting plans to mislead his allies into trusting him, but which team is his plan aimed at?

Will the Kamen Riders embrace their new status as insurgents? Will Sento’s father be a force for good or evil? Does Noel really intend to help any of his fellow heroes? Please share your thoughts with us in the comments below or join us on our Facebook page to discuss these shows and many others!

As the Riders take stock, Evol begins his final invasion of Touto. As Sento (Build) and Gentoku (Rogue) stand against him, Ryuga (Cross-Z) and Kazumi (Grease) deploy against Nariaki (Mad Rogue). However, Sento is more concerned with getting Evolt to reveal the true fate of his father, Shinobu, and gives him an opening to generate a black hole that slowly consumes the government offices. Seeing this prompts Ryuga to recall more of Evolt’s memories from Mars, which also unlocks extra power that allows him to overwhelm Nariaki and change a Bottle into a new, silver coloured state. As the offices disappear both Evolt and Nariaki retreat, and Ryuga finds himself under attack by a mysterious new enemy fighting under the cover of a smokescreen.

Evolt disguises himself as Seito’s Prime Minister and delivers a television address in which he declares that Japan is reunited under his rule. Sento is having a moment to contemplate on the cafe’s roof when the Takumi personality seemingly draws him into a world made from their memories. Takumi expresses their doubts about their father but Sento maintains his faith in him. Coming to his sense again, he finds himself being joined by Gentoku, who is distraught that he was unable to fulfil his father’s last wish. The pair return inside to find the news is reporting that the Kamen Riders have become a rebellious force attacking government forces.

Knowing it’s a trap, the Riders head out to meet their enemies regardless. While Ryuga and Kazumi take on a unit of Hard Guardians Sento and Gentoku stand against Nariaki. It initially seems that Nariaki has the upper hand but the duo stage a comeback and are able to knock Nariaki out of his transformation. With the battle over, the pair cancel their own transformations only to come under attack from…Build? The duplicate Build comes down from his position and cancels his own transformation, revealing himself to be Sento’s father.

Do you hope Gentoku’s return to seriousness signals the end of his endless cycling wardrobe? Is Nariaki basically just cannon fodder now? Is Shinobu becoming a duplicate Build a good way of keeping some of his earlier forms in use now that Sento has little need for them? Please come and join us in our forum or on our Facebook page and let us know your thoughts as Build enters it’s final straight!

Kaito Sentai Lupinranger VS Keisatsu Sentai Patranger, Episode 21
“Friend Or Foe? On Board Or Not?”

Noel (X) formally introduces himself to the Lupinrangers, but even after giving them his two Collection pieces the thieves remain suspicious of the intruder until Kogure arrives to confirm that he is a fellow employee of the Lupin family. However, Kogure also forces Noel to concede that after he infiltrated the Global Police to recover their pieces he ended up modifying them for the police instead. Noel then returns to the Global Police precinct, where he receives an even more hostile reception from the Patrangers. However, Noel maintains his cool and avoids their questions by citing his status as an undercover officer.

When Jim receives a Gangler alert, Noel contacts Kairi (Lupin Red) to pass the information along to him. The Patrangers encounter a particularly toothy Gangler called Gabatt, but quickly find themselves joined by the Lupinrangers. Gabatt uses his treasure to give himself an impenetrable silver skin, but quickly finds that an unbreakable safe door can still be unlocked as the thieves make off with its contents. While the Patrangers finish Gabatt off the Lupinrangers escape only to encounter Noel again. The newcomer decides he’d rather keep their prize for himself and attacks the trio in order to recover it. The Patrangers arrive just in time to watch him reclaim the piece, and as Gabatt reappears as a giant Noel invites Sakuya (Patren #2) and Tsukasa (Patren #3) to pilot his train-themed VS Vehicles. Keiichiro joins them and forms Pat Kaiser Trains to take the Gangler down for good.

Back at their station, Keiichiro and Noel shake hands and agree to work together, though the friendly gesture quickly turns into a contest of strength. Meanwhile, the Lupinrangers recover at their bistro as it’s revealed that their loss had been part of Noel’s plan to gain the police’s trust. Kogure catches up with Noel to finally reclaim the Collection pieces, only for Noel to insist that the two of them talk.

What are Noel’s true intentions? Do they coincide with one (or both) of the two teams? Or, like Kogure, is there the possibility that he has his own agenda? Let us know what you think of the newest ranger in our forum or the comments below!

You might also like:
SUPER HERO SYNOPSES | Friend or Foe?
Open Your Eyes to Have Dinner with KAMEN RIDER FAIZ!
ULTRAMAN R/B TV Premiere Promo & Poster