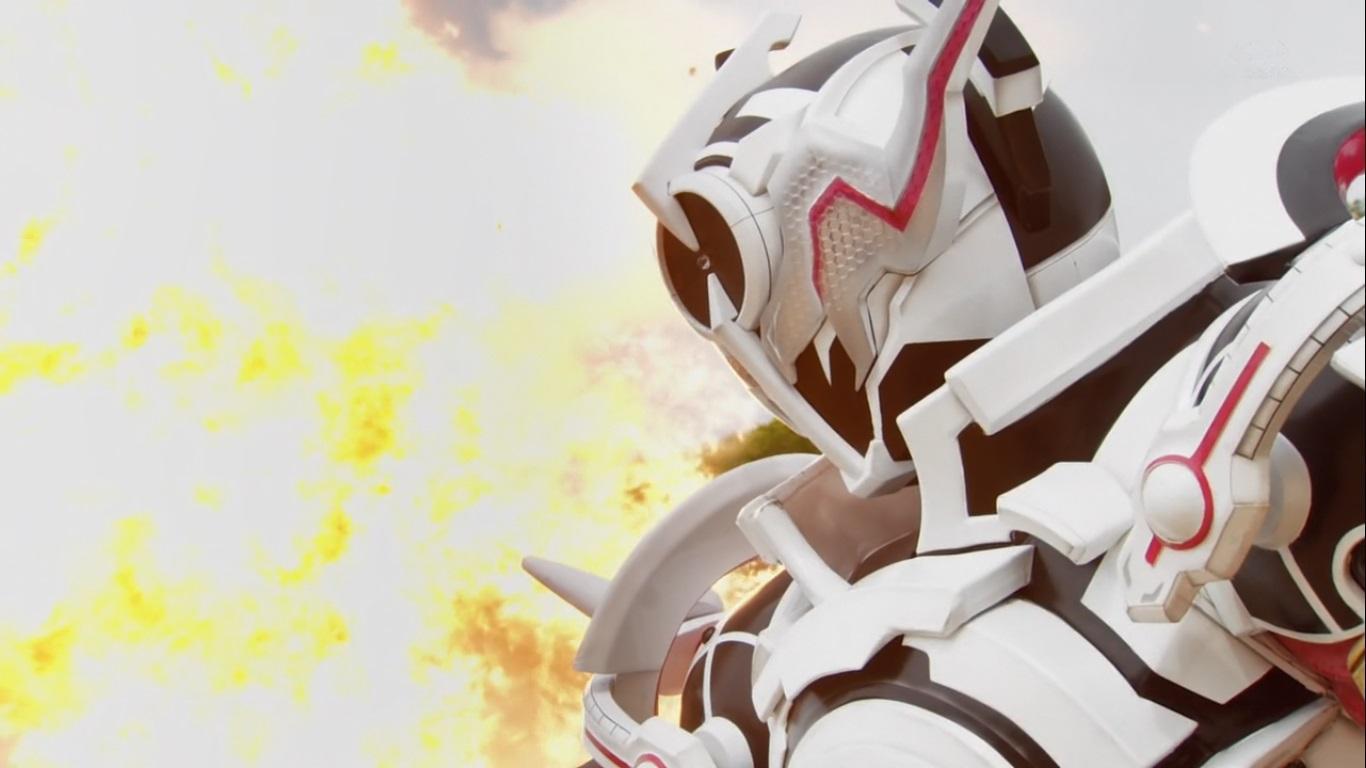 Welcome back to Super Hero Synopses, where partings are sometimes inevitable. The familial bonds of the Hell brothers, Rai and Fu, couldn’t overcome the death flags they’ve been tripping throughout their time on Kamen Rider Build. Of course, it doesn’t help when your opponent can literally fling singularities either. Meanwhile in Kaito Sentai Lupinranger VS Keisatsu Sentai Patranger it seems Keiichiro has an admirer, but a mix of single mindedness, mutual awkwardness, and an impending flight seem certain to dash the hopes of his would-be suitor from leaving things on the desired note.

Will Mad Rogue overwhelm his sane counterpart? Will Evolt evolve even further? Can Keiichiro learn to protect people emotionally as well as physically? Let us know whether you are enjoying these two shows in our forum or on our Facebook page.

Sento (Build) has reverted back to being Takumi and the other Riders are unable to resisy Evolt, prompting Gentoku (Rogue) to teleport them out of there. Evolt begins the process for the next stage of his evolution. He then visits Juusaburou Nanba and delivers an ultimatum: Follow Evolt’s orders as a mere puppet ruler or Evolt will simply kill him and take over anyway. With one day to decide, Nariaki leads the Hell brothers to the lab to administer them with another dose of Nebula gas in the hope that they can then put up some resistance. Evolt enters the lab and asks Nariaki to work for him, offering him his own Evolt Driver if he does so.

The others are in Sento’s lab and it’s becoming clear just how different their relationships with Takumi/Sento has become. While they mourn the loss of Sento, Gentoku takes him outside to see what has become of Touto. Gentoku then receives a call from Nariaki asking to meet him. He complies and Nariaki requests the Riders help. He returns to the others with the request but Kazumi immediately opts out of helping those who destroyed his life.

Evolt meets Nariaki for Nanba’s answer. Nariaki arrives with the Hell brothers and a squad of Hard Guardian robots. Evolt transforms and teleports them all to a beach, before destroying the robots with a wave of his hand. Gentoku, Ryuga and Takumi arrive to assist the Hell brothers, but are unable to stop Evolt as he summons a miniature black hole to consume Rai. Evolt’s next target it Ryuga, but Fu takes the hit instead and dies in Ryuga’s arms. Evolt then teleports to Nanba’s office and kills him as Nariaki watches on his tablet. He then teleports back and asks Nariaki whether he will accept his earlier offer. Nariaki does and is rewarded with the driver, transforming into Kamen Rider Mad Rogue.

Will anyone else be consumed by Evolt’s black holes? Were you expecting a more spectacular ending for the villainous Nanba? Were you surprised that Mad Rogue wasn’t an upgraded form for Gentoku? Please share your opinions with us in our forum, on our Facebook page, or in the comments below.

Keiichiro (Patren #1) is exchanging gifts with a girl called Mana. She is giving him a bouquet of flowers while he is lending her his favourite vinyl record. It’s clear to everyone else in the room that Mana is crushing hard, but Keiichiro remains oblivious and accidentally rebuffs her before leaving. As the other Patrangers chase after him Umika (Lupin Yellow) accompanies her friend. As they walk to Mana’s house they are attacked by a Gangler, Nero, who is putting people to sleep and trapping them in his dream world. The pair flee only for Mana to go back to recover Keiichiro’s record. Umika’s comrades arrive to face Nero, allowing the ladies to escape. At her house, Mana confides that she is leaving the next day to attend a school in Austria.

The next day Umika and Sakuya (Patran #2) are trying to convince Keiichiro to meet with Mana when she enters the bistro. They converse awkwardly before Keiichiro makes his excuses and escapes, with an angry Umika chasing after him. As he explains that he prefers to focus on his work rather than his private life, he gets an emergency call. Both teams intercept Nero and Umika charges in, determined to end things quickly so she can get Keiichiro to see Mana off at the airport. Nero manages to put her and the police to sleep. In the dream world Umika tries to bring the officers to their senses. Eventually she manages to snap Keiichiro out of his blissful state by singing a song from his record.

Keiichiro blasts his way out of the dream world, which also frees the others. As Nero was draining energy from his victims, the Patrangers are all weakened, so Good Striker prompts them to combine into Patren #4 to defeat their foe. Pat Kaiser clashes with Nero’s giant form as Mana heads to the airport in a taxi. As night falls, Keiichiro watches Mana’s plane take off from afar, leaving Umika angry that he didn’t go to see her. As she storms off, Keiichiro wonders why she was in the dream world. Elsewhere, Destra and Zamigo have a clandestine meeting in an alleyway.

Were you expecting a last-minute airport reconciliation? Is Keiichiro finally on the trail of the Lupinrangers’ secret identities? What were Destra and Zamigo plotting? Let us know what you think about the show in our forum, on our Facebook page, or in the comments below.