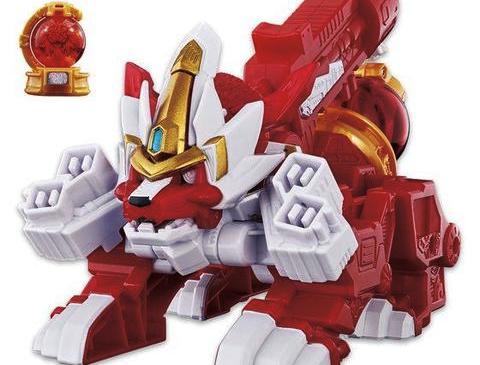 Uchuu Sentai Kyuranger‘s DX toy line has been pretty hit-and-miss as a whole, but it ends really strong with Kojishi Voyager, aka Caesar. Caesar is a small chibi-like lion toy, similar to Mini-Tyra from Zyuden Sentai Kyoryuger, but instead of combining with a weapon, he combines with a fellow Voyager mech.

On its own, I like this little guy, but the real fun begins when you add Shishi Voyager to the mix. Combining the two Voyagers together makes Super Shishi Voyager, my favorite form. This is an amazing form, changing the look of Shishi Voyager from a spaceship with a lion head into a full-fledged lion mecha. The size and silhouette of this thing is great, though I can see fans being bummed out by the lack of articulation. Overall, I think, combined, this is the best Voyager of the whole series and the best form this set makes.

Its other form is Super Kyuren-Oh and it’s underwhelming, to say the least. Basically, it’s Kyuren-Oh with a new Kyutama and head. The rest of the Kojishi pieces go on his back and form a mediocre, shoulder-mounted cannon. It looks “ok” at best but it’s flimsy and limits the already limited articulation. Despite all that, I adore this set and I think it’s a must-own if you already have DX Kyuren-Oh.

For this and other Super Sentai and Tokusatsu merchandise, check out CSToys and BigBadToyStore.