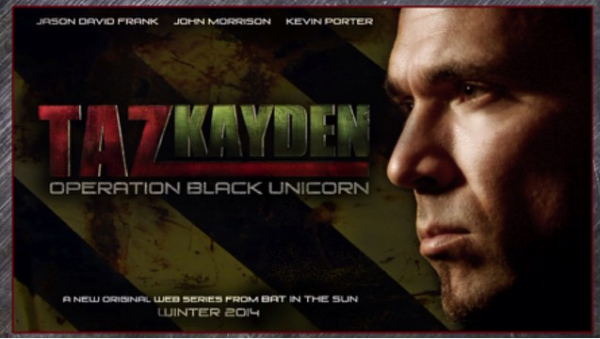 Popular Youtube Channel, Bat in the Sun, has done several projects with Power Rangers actors, most notably Mighty Morphin’s Green/White, Jason David Frank. After spawning a new series produced by Bat in the Sun, “My Morphin Life,” which is a documentary style show about Jason David Frank’s experiences, Bat in the Sun announced a new project, featuring not only Frank, but Jason Faunt (Time Force Red) and Pro Wrestler John Morrison! Hit the jump for the trailer, and more details!

Taz Kayden (Jason David Frank) a mercenary for hire, is tasked with the job of retrieving the “Black Unicorn” weapon from his revenge fueled ex-partner Russell Wallace (John Morrison) before it’s sold to an underground terrorist group.

We will release EPISODE 0 in January 2015 along with a Kickstarter to fund the rest of the action packed series!!!

We’ve chosen Kickstarter as the perfect platform so we are able to give the fans exactly what they want without any compromises.

You can follow Jason David Frank, Jason Faunt, and John Morrison, as well as Bat in the Sun, on their Social Media pages, linked on their names. Also check out Bat in the Sun on Youtube!

What do you think of the trailer, and the project’s potential? Let us know in the comments and forums, and keep it here for the latest on this film when Episode Zero and the Kickstarter go live!