The same person who claims to be making the Central Florida Ranger Con, or Convention, and thus the Mighty to Mega Ranger Cruise, made the Highlander 30th Anniversary Gathering. The news about THAT made it to the Rangerboard. RANGER DISCUSSION Mighty to Mega Ranger Cruise — March 3-5, 2017. I advise reading about this con before you spend any money in that direction. So I am reposting, sharing, here.

Posted to Facebook by John Mosby on Wednesday, December 7, 2016

Well, then. How was your weekend?

Conventions look easy. The secret is, they’re not.

If you attend an event, you hope things go pretty smoothly and any bumps are minor ones… you come away – if you’re an attendee – and feel that you had a good time and got value for money. You got access to interesting people and you likely made new friends. Good conventions: your experiences there can alter your entire life – I’m living proof.

Running an event is something entirely different. Essentially it’s a minimum of 9-10 months of sitting behind the wheel of a ten wheel juggernaut while simultaneously trying to play Tetris, scream at your GPS, mend flats, and deal with traffic on the road that may not have the same destination or priorities. While juggling chainsaws. In fact, it needs to be a fleet of juggernauts with a variety of drivers taking on responsibilities that no one person could without causing a pile-up.

Pile-ups are, thankfully, rare, but they are noticeable and sometimes spectacular in scope. A few years ago, the organisers of a Firefly convention abandoned fans in California to much gnashing of teeth and earlier this year police were called when the Sons of Anarchy proved a tad miffed when they turned up to find a hotel demanding money from them for their rooms and con-organisers, who’d skipped out with the appearance fees, running for the hills. It did not go well.

Pile-ups can be caused by genuine criminal intent or more likely simple naivety and incompetence – but the results can be as bad as each other.

For the last few months I’ve been tempering what I’ve said about LashCon because despite reservations I genuinely believed this was a case of an event that actively *wanted* to serve the fanbase. I didn’t feel this was a criminal enterprise, merely one that felt disorganised from the get-go. It’s ambitions were fundamentally flawed from the start, but it felt like it was trying, if sometimes flailing.

I’m going to continue, for the moment, to temper my words as it’s now no secret that there is likely to be legal action against the event and organiser Michael Lashman that is already moving forward.

I accepted the role of being the Highlander panel moderator for the event when it seemed Lashman and the event needed someone with a better knowledge of the series than he had. What had initially been an event celebrating the 30th anniversary of the film now had none of those film’s guests and the emphasis would be the tv series and later projects – something Lashman demonstrably couldn’t bluff his way through. The contract offered to me was genuinely generous and after making it clear that my individual involvement would and could not be seen as any kind of connection to my long time association with the far superior Highlander WorldWide, I agreed to attend and hopefully guide that part of the event (which was elsewhere in the programme now filling up, bizarrely, with non Highlander guests).

Privately, I spoke regularly with other invited guests and there continued to be comparisons of details. For reasons – which they can speak to themselves if they so wish – some guests decided to part company (the poster here would see a good 1/3rd of its line-up vanish) and others seemed to have been dropped by the convention rather than the other way around. That’s a legal distinction which might be important.

By the start of last week, the general opinion was that the organisation was a bit hapless and disorganised (wanting to change contract specifics but absolutely saying there was no need to worry and that everything would be honoured) but that it would ultimately and likely be an adequate small-scale amateur effort with delusions of grandeur. More last minute assurances were made. So we got on planes.

Until around 2:00am on Sunday, that remained the case. The schedule was messy and changing, more so than the average con and attendees were being co-opted to make decisions and take responsibilities rather than being an extra chain of helpers to supplement a fairly non-existent staff. Despite abysmal if predictably small numbers of ‘walk-in’ attendees (which for some reason Lashman had said he expected to be in the thousands despite very little advertising) there were probably about 250-300 people around all weekend. Most of these were the people who had booked for the classes being run by Adrian Paul , Elizabeth Gracen, F Braun McAsh and Anthony De Longis. Those classes went very well and I’d like to think I didn’t do a bad job with the already talkative people on the Highlander panels. In that sense, attendees were well-served.

However after 2:00 on Sunday as the first wave of guests needed to depart, excuses started to be made about payments and the reasons they could be honoured immediately. Tech issues. Lack of foot-fall. The house of cards began to shift. Some excuses sounded unfortunate but legitimate in the moment, but then different people were told utterly different things and it became clear very quickly that almost EVERY single guest was going to be affected. The hours ticked away and so did patience. The likes of Adrian Paul and the (lovely) Gigi Edgley took to social media as the scale of the problem became apparent and increased. Again, individuals can say address the particulars of certain specific additional grievances but it largely comes down to there being no money left in the coffers, some of which apparently shouldn’t have been in those coffers to begin with.

The irony is that much of what happened could have been limited in impact or handled if Lashman and the event had faced up to the quite blatant abyss between hopes and practicalities even as recently as a week ago. The panels and classes show that a boutique convention could have been a huge success. (It was GREAT to see Lizzie, Adrian, Braun, Anthony, Mary and the podcasters supreme and many fans – THAT element was a success. Gigi – you were great). If he’d admitted failings and tried to work with us to fix or limit them – come to some sort of compromise BEFORE not AFTER – much could have been salvaged. The bad-feeling – and the now inevitable legal action we’re looking at given the specifics of some of the actions he took to cope with the situation – comes because the event deliberately chose to bury its head in the sand, mislead guests and click its heels together in the hope of a ‘Hail Mary!’ that was never going to come. At that point any real sympathy evaporates.

Already there now seem to be attempts to divert the blame. But any finger-pointing at the likes of Rileah Ringo who merely designed the improved site for Lashman or the Adrian’s Angels group that stepped in to help and make the schedule realistic… is disingenuous – they did nothing wrong, simply believing what they were told and arguably saving the con from other problems. The blame is solely with Michael Lashman. I don’t ‘dislike’ him and meeting under other circumstances would have been fine – but you can’t be the affable ‘golly-gosh, this is a bit embarrassing, can I buy you a drink and I’ll explain why this isn’t really my fault’ guy to people when they already know they’re being spun because you’ve just told someone else a different story. I think we can safely say, will never run a fan convention again, even IF he can find money to cover this one. Even if other factors affected things, HIS decisions on how to deal with those remained unprofessional and damning. One might wish to put the experience down to simple naivety, but this isn’t Lashman’s first go-around fact that one can point to a list of other events in the last eighteen monthAnarchy Addicts Cruises which never actually took place (to name but two: Sci-Fi And Beyond Cruise http://www.lashconcruises.com/anarchy-cruise.html does point to an unacceptably long lack-of-learning curve.

Personally, I have no ‘animosity’ to Lashman, just sheer disappointment that the more I hear the less I like his personal actions and decision-making ability and his perchance to blame others for his own faults. I just want the money I was promised. And promised and promised. I’m probably at the back of a very long line of people who feel the same and are owed more and more urgently. I suspect you’ll hear more from people nearer the front of that queue soon. I have a pen. They have sharper tools of trade.

I’ll leave you with this thought.

Lashman personally drove Jill and I back to the airport. Largely in uncomfortable silence. The scenery was lovely, except when we got this close to t-boning a police car at an intersection.
Metaphors, gotta love ’em. 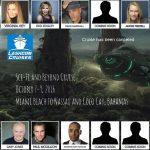 WatchMojo’s Top 10 Power Ranger Villains Getting Up to Date on Uchu Sentai Kyuuranger!