A Ghost Hunter named Takeru receives a gift from his late father; an odd, eye shaped artifact, but he is killed by monsters! However, when a strange event occurs, he learns that he has a chance to return to life. Hit the jump for fresh details on the brand new Kamen Rider Series, Kamen Rider Ghost!

According to a scan of the latest Bandai Catalog, provided by Hikari of Nihon Hero, we have learned a bit more about the story of Kamen Rider Ghost.

A Ghost Hunter named Takeru Tenkuji receives a gift from his late father; an artifact called an Ghost Eyecon, which looks strikingly like an Eyeball. However, a group of monsters called Ganma, who are targeting the Ghost Eyecon for currently unknown reasons, kill Takeru!

In order to save his childhood friend named Akari, he decides to fight Ganma as Kamen Rider Ghost which revives him.
He learns of a way to return to life; if Takeru can collect all fifteen of the Ghost Eyecon within 99 days, he will be granted a wish. He decides to fight the Ganma,and collect the Eyecon, to win back his full life.

While not much is known about this character, according to the Nihon Hero translator, he/she is called Kamen Rider Spectre. 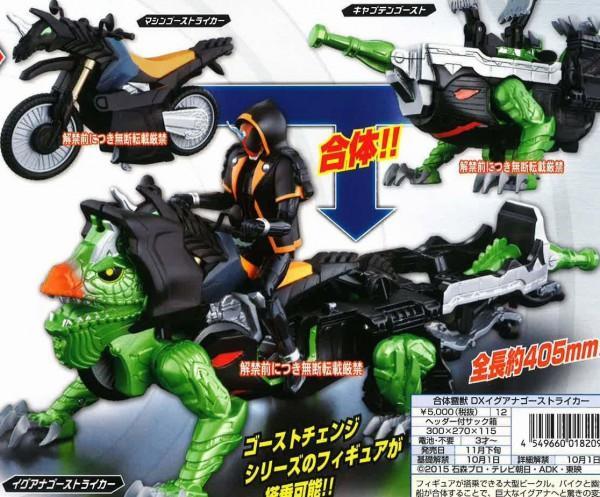 Kamen Rider Ghost’s bike, seen Top Left, is called Machine Ghostriker, named for the combination of the words “Ghost” and “Striker.”
The front part of the bike seems to have the face of a horse or unicorn.
There is also a related mecha, which, seen at the Top Right, seems to be a ship of some sort, and is called the Captain Ghost.
These two vehicles can combine into Iguana Ghostriker, seen at the bottom!

What will Kamen Rider Ghost bring us? What else is there to know about the Eyecon, Takeru, the Ganma, and even his father? Will Takeru win back his life? We’ll have to wait for Kamen Rider Ghost to premiere later this year to find out. Until then, let us know what you think so far in the comments and forums, and be sure to keep it here for the latest in tokusatsu news!