POWER/RANGERS is a Deboot FanFilm Of R-Rated War-Torn Epicness… with Katee Sackoff and James Van Der Beek?!?! From the Director of Torque??? 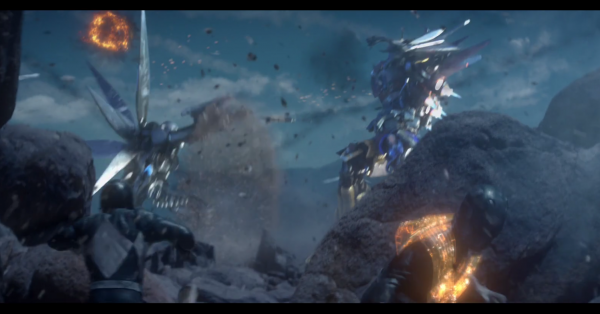 Look anywhere on YouTube and you’ll find any number of independently conceived concepts attributed to the Ameritoku crossover series, Mighty Morphin Power Rangers. There are a few in the works on smaller scales as well as a feature film from Lionsgate and Saban, and while many of these could likely hit all the similar tones of a kid-friendly show, there’s at least one vision that’s taken a life of its own which completely undoes it all.

That said, Torque/Detention helmer Joseph Kahn and Dirty Laundry one-shot producer, Bootleg Universe’s own Adi Shankar have a hell of a way of interpreting Ameritoku, and their latest contribution to the fandom with their own one-shot, Power/Rangers, is a distinct example of this. Written by Kahn, Dutch Southern and lead actor James Van Der Beek, Kahn’s is a version which removes the kid-friendly appeal and replaces it with all the trimmings of a big-scale epic, now host to an alternative look into a dark, tragic future where the Machine Empire has taken over, our heroes have fallen and virtually nothing is what it seems, showcasing a newer perspective on the shortfalls of being young and granted supernatural abilities to take on larger-than-life enemies, seen or otherwise. Essentially, its Ender’s Game by way of Tokusatsu with a shit-ton of NSFW storytelling and action with a level of violence and imagery, and character delivery almost perfectly suited for an R-rated concept. It’s what you can expect from the guy who also helped put together Dredd and the newly-released Gangs Of Wasseypur, and so by all means, I have no complaints.

Director’s Statement:
Deboot of the Power Rangers. My take on the FAN FILM. Not a pilot, not a series, not for profit, strictly for exhibition. This is a bootleg experiment not affiliated or endorsed by Saban Entertainment or Lionsgate nor is it selling any product. I claim no rights to any of the characters (don’t send me any money, not kickstarted, this film is free). This is the NSFW version. An alternate safe version is on youtube.

You can watch the safe version by clicking HERE, and while this may not be a pitch video for a bigger project, it damn well proves just how amazing a pairing Kahn and Shankar are, and just how worth it they are as artists. I’m keen to this.

Power/Rangers also stars Katie Sackhoff, Gichi Gamba, Russ Bain and Will Yun Lee with fight choreography by Don Thai Theerathada and the team over at 87Eleven. Watch below and click here to read more about it at Drew McWeeny’s exclusive article at HitFix.